To have the optimal experience while using this site, you will need to update your browser. You may want to try one of the following alternatives:

Don’t Count Out Sprinkler Systems in Your Home Just Yet! 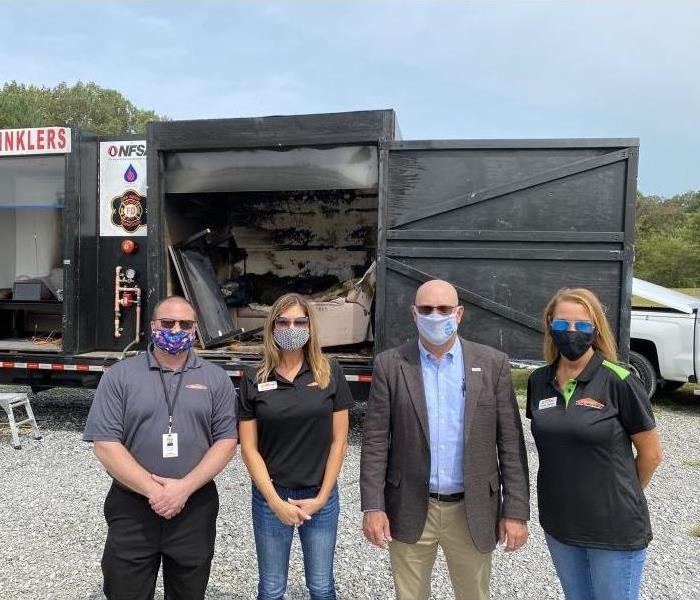 Our team members with the President of the NFSA, Shane Ray.

Don’t Count Out Sprinkler Systems in Your Home Just Yet!

It hasn’t been the most common house renovation in the past, but here at SERVPRO of Oak Ridge, we believe that home sprinkler systems have major benefits if a fire were to occur in your home.

We know that there are many myths about if one sprinkler head was triggered that would cause the whole system to activate, which isn’t the case. The National Fire Protection Association (NFPA) states “Each individual sprinkler is designed and calibrated to activate only during the heat from a fire. They do not operate in response to smoke, burned toast, cooking vapors, steam, or an activating smoke alarm.”

Maybe you’re thinking that a smoke alarm is enough, well smoke alarms alert occupants to the presence of danger but do nothing to extinguish the fire. Home fire sprinklers respond quickly to reduce heat, flames, and smoke from a fire, giving residents valuable time to get out safely. Having a working smoke alarm cuts the chances of dying in a reported fire in half. However, if you have a reported fire in your home, the risk of dying decreases by about 85% when sprinklers are present.

Our team recently attended a Burn Event hosted by the Oak Ridge Fire Department and the National Fire Sprinkler Association. At this event, there were two units, one with and one without sprinklers and our team got to see firsthand how quickly a home can go up in flames when sprinklers aren’t involved.

Even though the side with a sprinkler system will have water and fire damage most of the items will not be destroyed, that’s where SERVPRO of Oak Ridge would come and extract water and start the drying process as well as treat the smoke damaged content to make the items as good as they were before the fire took place.  In the unit without sprinklers,  the items will more than likely be destroyed beyond repair.

If you would like to watch our video with the President of the NFSA click here! Shane Ray explains further why sprinklers could be a way to prolong your chances of you and your family getting out of a fire safely.